Save
Facebook Twitter link
Texas Gov. Greg Abbott says he's resisting conservatives' calls for him to officially invoke war powers and declare that an "invasion" is taking place at his state's border with Mexico because of the pushback his state would get from the federal government under President Joe Biden's administration.

Abbott, a Republican, said in an interview on Edinburg, Texas talk radio station KURV-AM Wednesday that he's "not afraid of a court fight" with the administration, but there are concerns that Texas Department of Public Safety officers could be prosecuted by federal officials, reports The Dallas Morning News.

Abbott told KURV-AM talk show host Sergio Sanchez that after reading "every study" to determine what conditions must be to qualify as an invasion, there are problems with doing that.

"If I make that declaration and tell law enforcement to do it, and law enforcement does do this, they are subject to potential criminal penalties imposed by Merrick Garland, the United States attorney general, and the Biden administration," said Abbott. "[They] would be more than happy to arrest and prosecute a Texas law enforcement official, so we're looking forward to greater answers about that before we pull that trigger."

Further, even if the state police took undocumented immigrants back across the Rio Grande, they would "go a mile up the river and cross the border there," Abbott said. "It creates a revolving door."

Abbott has taken several other steps, short of declaring an invasion, in recent months, including saying that Texas will build its border wall and ordering National Guard members and police to arrest immigrants for trespassing charges.

However his "Operation Lone Star," is not getting respect from hardliners, reports The Dallas Morning News, despite spending more than $5 billion in state discretionary funds.

In the March GOP primary, Abbott challenger Don Huffines, a former Dallas state senator, accused Abbott of doing too little, stating that he would, under the U.S. Constitution, declare an invasion.

Article 1, Section 10, says that no state can, without the consent of the U.S. Congress, engage in war "unless actually invaded."

Several states used the argument in the 1990s when suing the federal government, but the cases were shut down.

Former acting deputy secretary of the Department of Homeland Security Ken Cuccinelli, a member of former President Donald Trump's administration, has used the approach that cartels, not migrants, are behind an invasion across the border.

Cuccinelli told The New York Times that Abbott's Lone Star initiative "hasn't moved the needle one iota for the simple reason that they're not returning people to Mexico."

Lawyers for Abbott and Texas Attorney General Ken Paxton met in April to discuss an invasion declaration, reports The Times, but Abbott said in his radio interview on Wednesday that "we haven't been able to conclude that it is a real solution.”

However, Abbott spokeswoman Renae Eze told the Dallas newspaper that "all options remain on the table to protect Texans," and confirmed that Coahuila, a Mexican border state, has requested and will receive razor wire to keep migrants away. 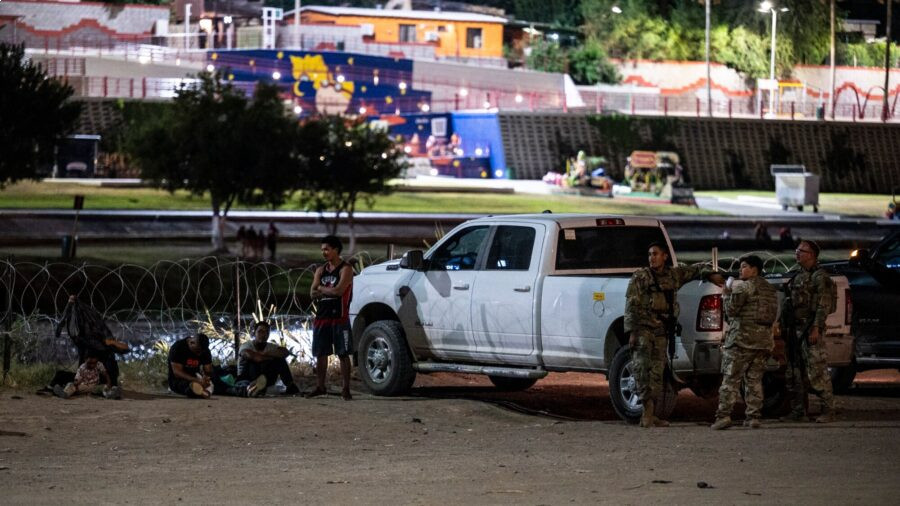