Save
Facebook Twitter link
LONDON—It was quite a collection of tennis luminaries sharing the black indoor hard court for a Laver Cup doubles practice session Thursday, 66 Grand Slam titles among them, a group collectively nicknamed the Big Four: Roger Federer and Rafael Nadal on one side of the net; Novak Djokovic and Andy Murray on the other.

This team event founded by his management company marks the end of Federer’s career, and his last match will come Friday night alongside longtime rival Nadal for Team Europe against the Team World doubles pairing of Frances Tiafoe and Jack Sock.

“I’m not sure if I can handle it all. But I’ll try,” the 41-year-old Federer said about his sure-to-be-emotional on-court farewell after 20 major championships, a total of 103 tournament titles and hundreds of weeks at No. 1 across nearly a quarter of a century as a professional tennis player.

“Sitting here,” Federer said Thursday at a team news conference, with Nadal, who is 36, to his left, and Djokovic and Murray, both 35, a couple of seats down to his right, “it feels good that I go first from the guys. It feels right.”

Federer is ending his playing days following a series of operations on his right knee. He hasn’t competed since a quarterfinal loss at Wimbledon to Hubert Hurkacz in July 2021.

In February of this year, when word emerged that Federer would be in London this week, he said Nadal messaged him suggesting they play doubles together again. They teamed up to win a doubles match during the first Laver Cup in 2017.

“I saw him playing on TV before I arrived on tour. I saw him having success on TV, and then [we were] able to create an amazing rivalry together. And on the other hand, something that probably we are very proud of is having a friendly rivalry,” Nadal said Thursday. “Tomorrow is going to be a special thing. Difficult. Going to be difficult to handle everything, especially for Roger, without a doubt. But for me, too. At the end, one of the most important players—if not the most important player—in my tennis career is leaving.”

They played each other in singles 40 times (Nadal won 26), including 14 Grand Slam matchups (Nadal won 10). Nadal came out on top in their classic 2008 Wimbledon final, considered by some the greatest match in history; Federer won their last showdown, in the 2019 semifinals at the All England Club.

“To be part of this historic moment,” Nadal said about Friday, “is going to be something amazing, unforgettable.”

Switzerland’s Roger Federer (R) and Spain’s Rafael Nadal attend a training session ahead of the Laver Cup tennis tournament at the O2 in London on Sept. 22, 2022. (Kin Cheung/AP Photo)

Added Tiafoe: “It’s going to be iconic to be a part of that. Both guys are absolute legends. And obviously, [it’s] Roger’s last dance.”

The full lineup for Day 1 of the three-day Laver Cup was announced Thursday.

Everyone knows what the main event will be: Federer’s goodbye.

“For me,” Murray said, “it feels right seeing him and Rafa on the same side of the net together.” Injured Nadal Pulls out of Wimbledon, Sends Kyrgios Into Final 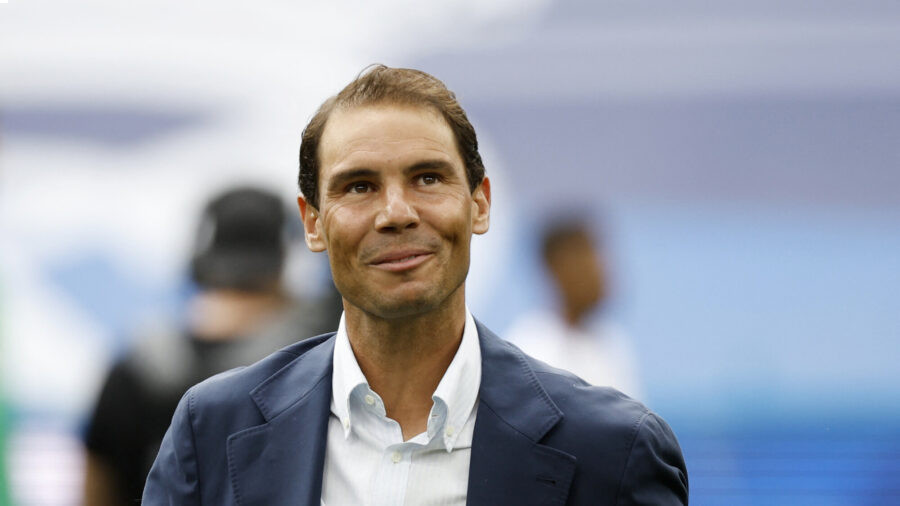 Nadal out of US Open, Ends Season to Heal Injured Foot