Rich Trio Back on Earth After Charter Trip to Space Station 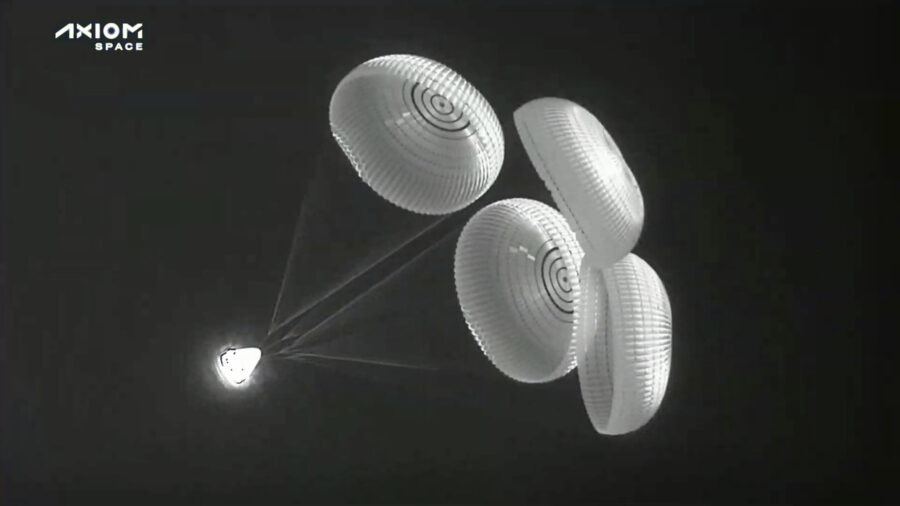 Save
Facebook Twitter link
CAPE CANAVERAL, Fla.—Three rich businessmen returned from the International Space Station with their astronaut escort Monday, wrapping up a pricey trip that marked NASA’s debut as a B&B host.

Flying back in a SpaceX capsule, they splashed down in the Atlantic off the Florida coast to close out a 17-day tour that cost them $55 million apiece.

The trip was supposed to last a little over a week, but dicey weather kept the visitors in orbit almost twice as long as intended.

“Welcome back to planet Earth,” radioed SpaceX Mission Control from Southern California. “We hope you enjoyed the extra few days in space.”

The Dragon space capsule after splashdown in the Atlantic Ocean off the Florida coast, on April 25, 2022. (SpaceX via AP)

Before departing the space station Sunday night, the group thanked their seven hosts, including three NASA astronauts whose own mission is nearing an end.

It was the first time NASA opened its space hatches to tourists after shunning the practice perfected over the decades by Russia. Last fall, a Russian film crew flew up, followed by a Japanese fashion mogul and his assistant. In each case, an active-duty cosmonaut traveled with them.

The latest guests were accompanied by a former NASA astronaut now working for Axiom Space, the Houston company in charge of the flight, making it the first fully private trip to the space station.

After hosting longer than expected, NASA was itching to make room for the next crew. SpaceX will attempt to launch three NASA astronauts and one Italian to the space station as soon as Wednesday. They’ll replace the three Americans and a German up there since November who will head back to Earth in their own SpaceX capsule.

The pace is blazingly fast by NASA standards. SpaceX’s Benji Reed said the company launched its first passengers—a pair of NASA test pilots—two years ago and just completed its first private flight to the space station using the same capsule.

Axiom handled the logistics for the trip for its three paying customers: Connor from Dayton, Ohio; Canadian private equity CEO Mark Pathy; and Israeli investor Eytan Stibbe of Tel Aviv. Their chaperone was Michael Lopez-Alegria, an Axiom vice president who flew to space four times while a NASA astronaut.

It was an “amazing adventure that we’ve had, even longer and more exciting than we thought,” Lopez-Alegria said after departing the space station.

Axiom teamed up with SpaceX for the journey that began with an April 8 liftoff from NASA’s Kennedy Space Center. It was SpaceX’s second private flight, coming just months after a billionaire’s orbital jaunt with contest winners.

While in space, the visitors did experiments and peered back at Earth.

“It’s been eye-opening in so many ways,” Pathy said, “that I think will have such a lasting impact on my life.”

The experience was especially personal for Stibbe. He served as a fighter pilot under Ilan Ramon, Israel’s first astronaut who died aboard space shuttle Columbia in 2003.

Stibbe flew copies of the surviving pages of Ramon’s space diary, as well as artwork and music created by Ramon’s children. He celebrated Passover with matzah bread he took up and gefilte fish offered by the station’s Russians.

Axiom’s second flight is set for next spring as the company looks ahead to having its own space station by 2030.

“There were a lot of eyes on this mission just to see if it was practical,” Derek Hassmann, Axiom’s operations director, said after the splashdown. “Everybody understood it was possible,” but wondered if amateurs could pull this off with abbreviated training, without disturbing the space station crew.

“I think we proved we could do that,” Hassmann said.