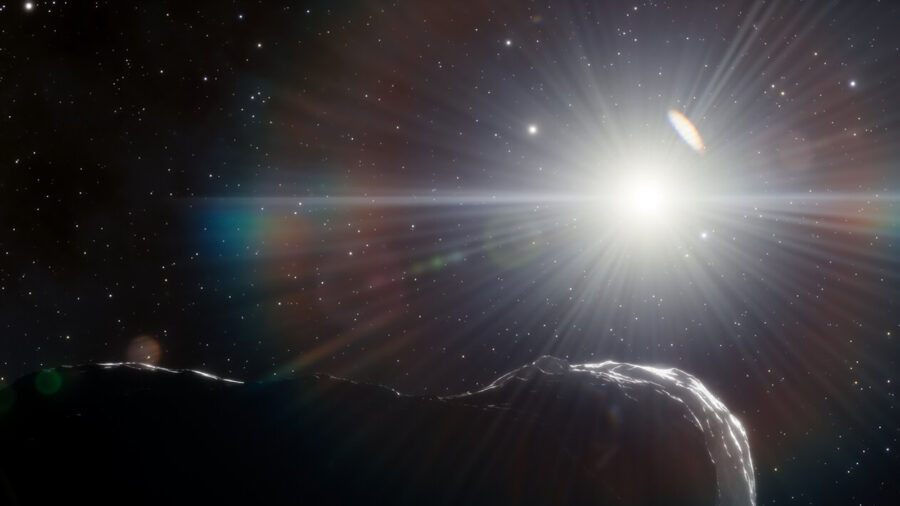 Save
Facebook Twitter link
Astronomers have spotted three near-Earth asteroids that were lurking undetected within the glare of the sun. One of the asteroids is the largest potentially hazardous object posing a risk to Earth to be discovered in the last eight years.

The asteroids belong to a group found within the orbits of Earth and Venus, but they’re incredibly difficult to observe because the brightness of the sun shields them from telescope observations.

To avoid the sun’s glare, astronomers leaped at the chance to conduct their observations during the brief window of twilight. An international team spied the space rocks while using the Dark Energy Camera located on the Víctor M. Blanco 4-meter Telescope located at the Cerro Tololo Inter-American Observatory in Chile.

Their findings were published Monday in The Astronomical Journal.

One of the asteroids, called 2022 AP7, is 1.5 kilometers (0.9 miles) wide and has an orbit that could bring it within Earth’s path in the future, but it’s difficult for the scientists to know when.

“Our twilight survey is scouring the area within the orbits of Earth and Venus for asteroids,” said lead study author Scott S. Sheppard, an astronomer at the Earth & Planets Laboratory of the Carnegie Institution for Science in Washington in a statement.

“So far we have found two large near-Earth asteroids that are about 1 kilometer across, a size that we call planet killers.”

Scientists determined that the asteroid crosses Earth’s orbit, but it occurs when Earth is on the opposite side of the sun—this pattern will continue for centuries since it takes the asteroid five years to complete an orbit around the sun. But over time, the asteroid’s orbital movement will be more in sync with Earth’s. Scientists don’t know the asteroid’s orbit with enough precision to say how dangerous it could become in the future, but for now, it “will stay well away from Earth,” Sheppard said.

A near-Earth asteroid measuring 1 kilometer (0.6 mile) or larger “would have a devastating impact on life as we know it,” he said. Dust and pollutants would fill the atmosphere for years, cooling the planet and preventing sunlight from reaching Earth’s surface.

“It would be a mass extinction event like hasn’t been seen on Earth in millions of years,” Sheppard said.

The team expects to find more planet killer asteroids in their survey over the next couple of years. Scientists believe there are about 1,000 near-Earth objects larger than 1 kilometer in size, and surveys over the last decade have found about 95 percent of them.

Astronomers are intrigued by 2021 PH27, however, because it’s the closest known asteroid to the sun. As the space rock moves closer to our star, its surface reaches temperatures hot enough to meld lead.

Asteroid-hunting astronomers face quite a challenge if they want to find space rocks within the inner solar system—which includes Mercury, Venus, Earth, Mars, and the main asteroid belt. In order to avoid the harsh light of the sun, they only have two 10-minute windows each night to sweep the area with ground-based telescopes.

During twilight, astronomers still face the complications of a bright sky in the background due to the sun. And in order to search the inner solar system, their telescopes must focus near the horizon, which means they have to peer through Earth’s thick atmosphere and its blurring effects.

If things sound complicated for ground-based telescopes, observations of the inner solar system are impossible for space-based telescopes like Hubble and James Webb because the sun’s heat and intense light could fry their instruments, which is why both space observatories are pointed away from the star.

The Dark Energy Camera’s wide-field capability helped astronomers overcome their observational challenges and they were able to sweep vast stretches of the night sky in detail.

“Large areas of sky are required because the inner asteroids are rare, and deep images are needed because asteroids are faint and you are fighting the bright twilight sky near the Sun as well as the distorting effect of Earth’s atmosphere,” Sheppard said. “DECam can cover large areas of sky to depths not achievable on smaller telescopes, allowing us to go deeper, cover more sky, and probe the inner Solar System in ways never done before.”

Near-Earth objects are asteroids and comets with an orbit that places them within 48.3 million kilometers (30 million miles) from Earth. Detecting the threat of near-Earth objects that could cause grave harm is a primary focus of NASA and other space organizations around the world.

No asteroids are currently on a direct impact course with Earth, but more than 27,000 near-Earth asteroids exist in all shapes and sizes.

While NASA recently proved it can successfully alter the motion of an asteroid in space with September’s Double Asteroid Redirection Test, or DART mission, astronomers first must find space rocks that pose a threat to our planet. Instruments like the Dark Energy Camera, as well as future space-based observatories like the Near Earth Object Surveyor, can pinpoint previously unknown asteroids.

Studying and understanding asteroid populations will also help scientists learn the distribution and dynamics of space rocks—like how the heat of the sun can fracture and fragment them over time.

“Our DECam survey is one of the largest and most sensitive searches ever performed for objects within Earth’s orbit and near to Venus’s orbit,” Sheppard said. “This is a unique chance to understand what types of objects are lurking in the inner Solar System.”