Graveyard of Ancient Stars Uncovered in the Milky Way 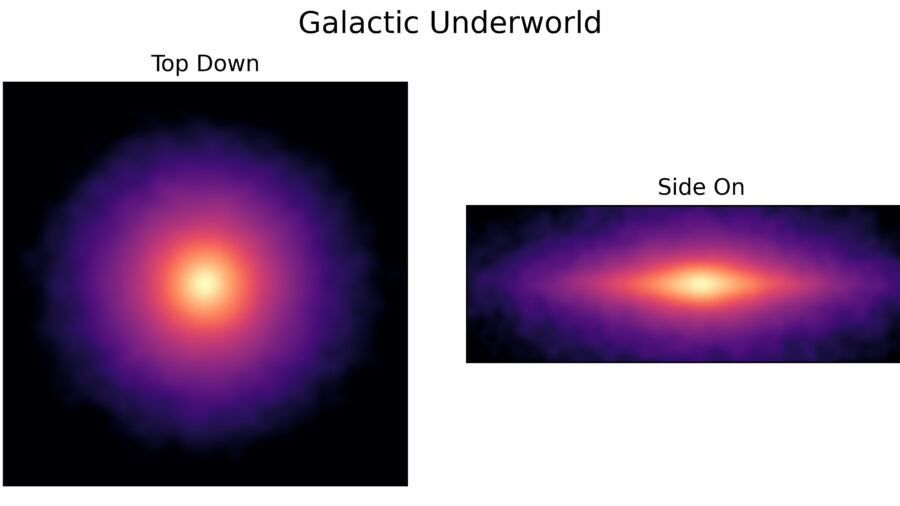 Save
Facebook Twitter link
The Milky Way galaxy has a graveyard of dead stars that stretches three times the height of the galaxy, according to new research. Astronomers found the ancient stellar remnants when they mapped this “galactic underworld” for the first time.

Our galaxy, which formed about 13 billion years ago, has been the home of billions of stars. Over time, many of these massive objects have collapsed into dense remnants.

When a star more than eight times larger than the sun burns through its elements and collapses, the outer layers of the star explode in a supernova. Meanwhile, the stellar core condenses into either a neutron star or black hole.

Modern neutron stars and black holes formed in the Milky Way are easier to spot because they stay within our galaxy and conform to its shape. But the ancient stars that existed in the young, evolving Milky Way galaxy were like stellar ghosts when the researchers tried to find them.

The very supernova explosions that triggered the collapse of the stars actually kicked them out into interstellar space. Researchers determined that 30 percent of those stellar remnants have been kicked out of the galaxy completely, according to their study published in the latest issue of the journal Monthly Notices of the Royal Astronomical Society.

The research team was able to map where the stellar remains rest within and around our galaxy by recreating the life cycle of the ancient stars.

“One of the problems for finding these ancient objects is that, until now, we had no idea where to look,” said study coauthor Peter Tuthill, professor at the School of Physics and director of the Sydney Institute for Astronomy at The University of Sydney in Australia, in a statement.

This point chart shows the visible portions of the Milky Way galaxy. (University of Sydney)

“The oldest neutron stars and black holes were created when the galaxy was younger and shaped differently, and then subjected to complex changes spanning billions of years. It has been a major task to model all of this to find them. It was like trying to find the mythical elephant’s graveyard. The bones of these rare massive stars had to be out there, but they seemed to shroud themselves in mystery.”

The researchers faced many challenges when trying to retrace the steps of the ancient stars and their violent death throes. When a star explodes in a supernova, it receives a “kick.”

“Supernova explosions are asymmetric, and the remnants are ejected at high speed—up to millions of kilometers per hour—and, even worse, this happens in an unknown and random direction for every object,” said lead study author David Sweeney, a doctoral student at the Sydney Institute for Astronomy of The University of Sydney, in a statement.

The visible portions of the Milky Way, without its hidden galactic underworld on display. (University of Sydney)

Knowing the magnitude wasn’t enough, either. The team also had to model how the stars would behave and the orbits they might enter after experiencing a supernova. There was also no friction to slow down the speeding stellar remnants.

“Almost all the remnants ever formed are still out there, sliding like ghosts through interstellar space,” Sweeney said.

The new map includes where the stars were born within the Milky Way, where they exploded, and their eventual resting places.

Comparing the Milky Way’s current appearance with the new model of its stellar necropolis shows striking differences. The galaxy’s characteristic spiral arms seem to disappear beneath all of the supernova kicks that wash them out.

The “galactic underworld” also appears taller and more puffy than the Milky Way because the supernova kicks pushed the remnants into a kind of halo formation around the galaxy.

This point chart reveals the “puffy” nature of the Milky Way’s galactic underworld. (University of Sydney)

“It was a bit of a shock,” said study coauthor Dr. Sanjib Sharma, a research fellow at The University of Sydney, in a statement. “I work every day with images of the visible galaxy we know today, and I expected that the galactic underworld would be subtly different, but similar in broad strokes. I was not expecting such a radical change in form.”

The research team estimated that the stellar ghosts may even drift relatively close to our sun, astronomically speaking.

“Statistically, our nearest remnant should be only 65 light years away: more or less in our backyard, in galactic terms,” Tuthill said.

The map will allow scientists to pinpoint individual remnants to learn more about the evolution of the galaxy and its stellar timeline.

“Now that we know where to look, we’re developing technologies to go hunting for them,” Sweeney said. “I’m betting that the ‘galactic underworld’ won’t stay shrouded in mystery for very much longer.”