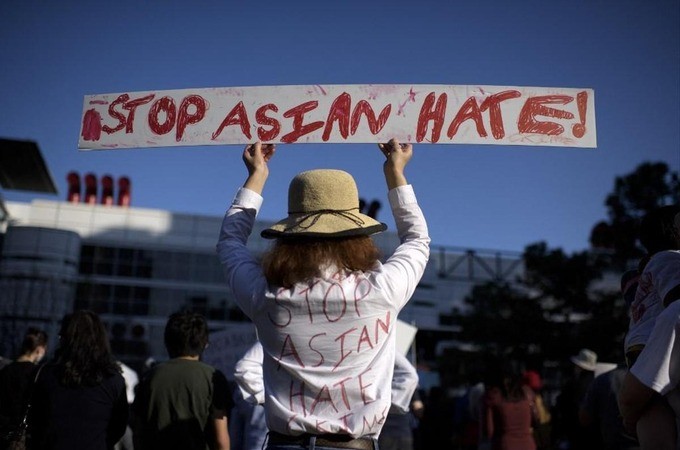 Save
Facebook Twitter link
After six Asian women died in the recent shootings at three spas in Atlanta, Georgia, the grief and outrage brought many to the attention of racism and increased violence against Asians in America.

Hostility to Asians has increased in the US and occurred in Europe in the past year, making many people afraid to go out.

But this is not just an American problem. From England to Australia, hostility to Asians was on the rise in Europe during the pandemic. Some Western politicians have repeatedly emphasized the relationship between China and Covid-19, and in that context, the East Asians and Southeast Asians in the continent are increasingly the targets of discrimination.

But many European countries, including France, Germany, and Belgium, do not collect ethnicity-based demographic data for historical reasons, making it difficult to grasp the exact scale of the problem.

In the UK, London Metropolitan Police figures show that more than 200 hate crimes against East Asians occurred from June to September 2020, increasing 96% over the same period last year.

Peng Wang, a Chinese lecturer at the University of Southampton, UK, was attacked by four young white men aged 20-25 while jogging near his home on February 23. "Some crazy guys got in the car and yelled at me from across the street," said the 37-year-old trainer. "They said 'Chinese virus, get out of this country, you bastard.'"

When Wang protested, a group of young people got out of the car, punched in the face, and kicked him down onto the street.

Although Wang was not seriously injured, the attack left a "psychological phantom," scaring him out of the house, worried about his future in England and his son's safety. "What they do is so uncivilized. It shouldn't happen in today's society. They treat me like an animal," he said. Police later arrested two suspects.

"When Donald Trump was President of the United States, he called COVID19 'the Chinese virus,' which was completely wrong," Wang added.

During a debate in October about racism against Chinese and East Asians in the British parliament, MP David Linden said some voters "described restaurants and food shops. Destroyed or ostracized; many victims were punched and spit on the streets, even insulted and blamed for Covid-19 ".

In June, a poll found that three-quarters of Chinese people in the UK have been insulted with racist terms. As the pandemic raged across Europe, activists in Spain and France also began to notice the problem. Campaigns like spreading the keyword "I'm not a virus" were created to raise awareness of violence against Asians.

In March 2020, Thomas Siu, a 30-year-old Chinese-American, said he was attacked in Madrid after two men shouted racist statements regarding Covid-19.

Siu said that in January-March 2020, he was insulted ten times. After that, he made up his mind not to endure but shouted at those who discriminated against him. But he was knocked unconscious by them. "I've always been aware that there is racism here, but people don't admit it," Siu said.

Susana Ye, a 29-year-old Spanish journalist who made a documentary about the Chinese community in the country in 2019, told CNN that the issue of violence against Asians in Spain had been The press in this country is considered expected and has less coverage.

"For many people, it doesn't matter because many journalists don't live in the Asian community or know them," she said. "They don't have an anti-racist attitude, and they don't understand anything other than their own."

She said the hate crime issue received little attention in Spain due to the language barrier, some fear deportation, and the elderly's tendency to keep quiet. "People insult and assault us because they believe we will not respond," she said. "They were used to us not speaking up."

Quan Zhou Wu, a manga artist, living in Madrid, Spain, agrees with this point of view. "The Atlanta shooting did not hit the front page of the Spanish media; it was super small news; we were like invisible people," she said. A 2019 Spanish government report found that 2.9% of Asians living in the country were victims of hate crime.

In France, campaigners say the pandemic has made the problem of Asian-Asian stigma worse. "Since last year, racism has become more apparent," said Sun-Lay Tan, a spokesman for Security for All, representing more than 40 Asian associations. Say they don't like Asians and don't like China ".

The group estimates that in 2019, one hostile crime against Asians occurs every two days in the Paris region alone. A man was beaten to dislocate his shoulder because French President Emmanuel Macron announced a new blockade's imposition in October 2020.

Tan said he first experienced xenophobia in France in February 2020, when a man swapped seats on a subway train after Tan sat next to him.

"Our parents are racist, but they accept it because they want to integrate with the country. We are the second generation of immigrants in France; our responsibility is to speak up and make the country. France is better for the next generation," he said.

Filmmaker Popo Fan in Berlin, born in Jiangsu province, China, said the situation was dire at the beginning of the pandemic. He is afraid of going out and taking public transport.

"When the pandemic first broke out, I was spit and cursed on the subway in Berlin," Fan said. "I don't know what to think since my attacker is also an immigrant. He's drunk and probably has a lower socioeconomic background. I feel like German society hasn't provided him. Sufficient resources or education on racial diversity and public health. He does not have access to that information."

Tan argues that the responsibility rests with German officials "who" don't seem to care enough about racial issues." Even before a pandemic broke out, he was repeatedly targeted on the streets. "One person yelled at me, saying, 'go back to China. The police said there was nothing they could do," said Tan. This is not just a European problem. A March report by the Lowy Institute in Australia found that more than a third of Chinese Australians felt they were treated differently or negatively during the year. UK to Ban Online Racists from Games after Euro 2020 Uproar Newt Gingrich on Biden Administration: ' Most Anti-American Presidency in History' Asian in America amid COVID-19: Pain, Blood and Tears